Despite at first glance potatoes might appear to be some form of root, they are in fact modified underground stems.  They are organs of both food storage and asexual reproduction and are called ‘tubers’.

If you store a potato for too long in the dark it will begin to sprout from the ‘eyes’. These ‘eyes’ are nodes from which new plants, both shoots and roots can grow and these new plants will go on to become independent plans, genetically identical to the original parent plant from which the original tuber came from.

The potatoes that are planted underground are called ‘seed potatoes’ although they are not, of course, seeds that are the result of fertilisation in flowers.  Gardeners often cut their seed potatoes into pieces which have 2 or 3 ‘eyes’ and these pieces will produce sprouts and go on to grow new plants which will yield their own crop of potatoes.

Following planting of ‘seed’ potatoes in spring, shoots grow from the ‘eyes’. 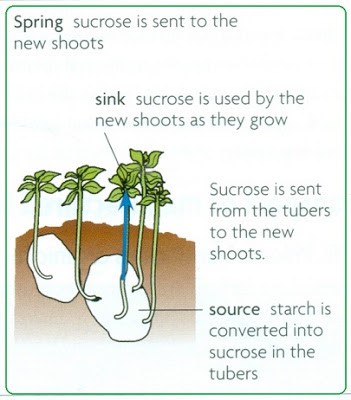 In spring, they begin to grow new shoots and leaves. The starch in the tubers is converted to the sucrose, and transported in the phloem to the growing stems, leaves and roots. This will continue until the leaves are above ground, photosynthesise and start to produce sugar themselves. 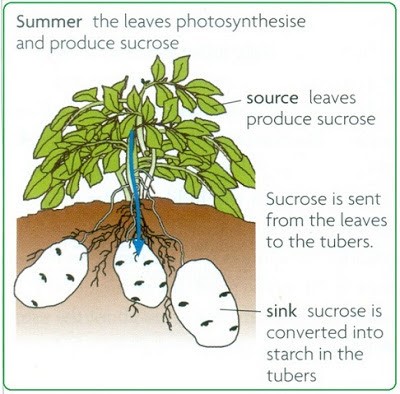 During the summer, the leaves continue to photosynthesise and send sucrose down into underground stems. Here, swellings called tubers develop. The cells in the root tubers change the sucrose to starch and store it, to enable the plant to survive through the winter once the stems and leaves have died back.

The tubers have therefore enabled the plant to produce new, identical plants and to store energy through the winter.  They are therefore organs of asexual reproduction and storage.

‘What bliss it was to be alive when the potato came to the Highlands. It had first been cultivated in Scotland near Stirling in 1739 and was introduced to South Uist by Macdonald of Clanranald in 1743……
……It was cheap, grew well in poor soil and was highly nutritious. Within two generations it provided 80 per cent of the Highlanders' diet and the population began to grow, spurring many to emigrate across the Atlantic for freedom, land of their own and to escape overcrowding. However there was a snag. The potato was prone to disease, particularly when conditions were damp, and when is it otherwise in the Highlands? Crops suffered in 1836-7 but this was just an ominous precursor to what took place a decade later.’
James Irvine Robertson looks at the history of the potato in Scotland - Scotland Magazine Issue 64 August 2012.

‘A History of Scotland’ – BBC documentary series with Neil Oliver, with this episode covering the 1840s Potato Famine (watch from 39:55).

Two cinema adverts from Scotland on Screen to encourage children to go ‘Tattie Howkin’ in the 1950s. Advert 1.  Advert 2.

Information about potatoes in Scotland, including regulations and some production figures, from the Scottish Government.

A range of basic information for small scale production from the Royal Horticultural Society.
Similar information from Unwins.
Also from BBC Gardening Guides.
More detail provided in this website devoted to 'How to Grow Potatoes'.

‘How to Plant Potatoes’ YouTube video from Calso Cooks (from Ireland) on planting potatoes.  He digs a trench and then spaces the potatoes along the trench.  This is the ‘normal’ procedure for growing potatoes in a garden.  To grow on a ‘field scale’ if you have access to a tractor to a 2 furrow plough, the method is to plant behind the plough.  The potatoes are planted in the left hand furrow, about 1 foot apart, and on the next pass the right hand furrow fills in and covers the potatoes from the first row and you plant the next row in the left hand furrow.  When planting in the furrow, push the potatoes firmly into the right hand side of the furrow as the tractor driver will run his right hand wheels in the furrow on the next pass and you don’t want all your potatoes squashed!

Another take on ‘How to plant potatoes’ from America with the Sustainable Seed Company giving several different methods of planting.

Of course Fraser Darling has a chapter on 'Growing Early Potatoes' in his Crofting Agriculture, Edinburgh 1945, which should not be ignored!

Scottish Heritage potatoes in ‘A Guide to Scotland’s Potato Varieties’.

Carroll’s Heritage Potatoes is a farm business based in North Northumbria devoted to the production and promotion of heritage potatoes and their website gives details of a number of varieties as well as offering seed potatoes (and potatoes for eating) for sale and giving a history of the potato.

This project is funded by a generous donation from Mr & Mrs T Hubbard, New York, USA through the NTS Foundation USA and by a grant from the Ernest Cook Trust